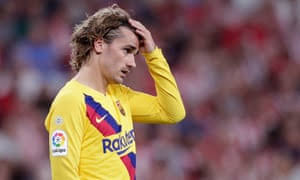 Lionel Messi was sorely missed as a lacklustre Barcelona were downed by an Aritz Aduriz golazo in a 1-0 loss to Athletic Bilbao in their La Liga season opener at San Mames on Friday night.

The buildup to the match was dominated by the news that Messi was unfit to play  and the imminent loan move of Philippe Coutinho to Bayern Munich.

The opening 30 minutes belonged to the hosts with Marc-Andre ter Stegen twice called into action to keep out quality efforts by Inaki Williams before the quarter hour.


Barca's best first-half chance was gifted to them when Athletic's Unai Lopez played a back pass right to the feet of Luis Suarez  only for the Uruguayan to smash his shot off the post with only the keeper to beat.

Suarez picked up a knock on the play and made way for Rafinha on 37 minutes and the Brazilian rattled the crossbar minutes later before the teams headed to dressing room locked in a scoreless draw.

It was more of the same for Barcelona in the second half, with Rafinha the lone bright spot as Ernesto Valverde's side only managed one shot on goal in the entire match despite dominating possession.

With the match looking likely to end in a draw, substitute Aduriz smashed home a spectacular scissor-kick goal just after coming into the match to hand Athletic all three points and Barca a shock loss to start the season.


Aritz Aduriz scored a stunning scissor-kick to lift Athletic Bilbao over Barcelona in the La Liga opening match. Juan Manuel Serrano Arce/Getty Images
"Sometimes football is so beautiful and when you least expect it a ball like that comes to your feet and goes into the net," Aduriz told reporters.

"Barcelona are the best team around and it's very difficult to last a whole game taking them on and matching them for space but we knew exactly how to manage our energy."

The result marks the first time Barcelona were held scoreless in an opening La Liga fixture since a 1-0 loss to Numancia in August 2008, ending a run of 10-straight wins on matchday one in the league.

"This is a very difficult ground to come to and we were made to see how tough the competition is," said Barca defender Gerard Pique.

"We did not play like we usually do and they put us under a lot of pressure and if you're not at your very best then a team like Athletic walks all over you."

Following the match, Valverde gave an update on the fitness and outlook on the injury sustained by Suarez and what the team needs to do when they are faced with the prospect of playing without Messi.

"Suarez had a problem with his calf and we will have to wait and see what the tests say," Valverde said. "We were in and around Athletic's box in the second half and we missed him.

"We're used to having Messi solve problems for us but we have to perform when he's not there. We've done it in the past. It's inevitable we're going to miss him, but we have to look at other things, too."

Next up for Barcelona is a home match against Real Betis in which the defending champions will hope Messi can return to action.