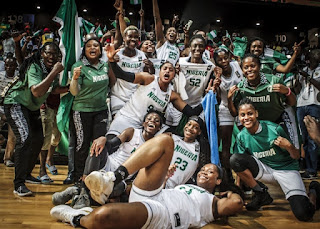 Defending champions Nigeria are through to the final of the on-going FIBA Women’s AfroBasket Championship in Senegal after making easy work of Mali in Friday’s semi-final encounter in Dakar.

In what was supposed to be their biggest test yet at the championship, D’Tigress defeated their Malian counterparts 79-58 to progress to the final, where they will face either host nation Senegal or Mozambique.

Ezinne Kalu led D’Tigress in the scoring department with a game-high 19-point haul. Adaora Elonu pitched in with 13 points, while the duo of Ify Ibekwe and Evelyn Akhator contributed 12 points respectively.

Nigeria, Mali, Mozambique, and Senegal have automatically qualified for the Tokyo 2020 Olympics pre-qualifying tournament that is scheduled to be played in November.