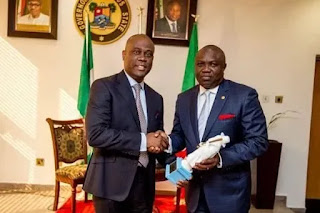 Why Ambode Has Stayed Put in London

The Economic and Financial Crimes Commission, EFCC, has begun investigations into some of the financial dealings of former Governor Akinwunmi Ambode during his tenure in Lagos State.

Ambode is being investigated for several deals ranging from unilateral award of over-inflated contracts, cooking the books of the state and approving many opaque deals that did not go through due process.

There are also allegations of the state’s commonwealth being diverted to private accounts in countries like Seychelles and Mauritius while, in and around Alausa, the Lagos State secretariat, the issue of how Ambode failed in his bid to replace minutes of past EXCO meetings with doctored ones in order to cover up his draconian style, is on the lips of everyone.

It would be recalled that days back, operatives of the EFCC stormed his Epe country home on routine investigation but were violently denied entry by a horde of cudgel-wielding, irate youth.

In a statement by his media aide, Habib Aruna, averred that the EFCC operatives’ visit to his houses was without any prior notice.

Conversely, Tony Orilade, spokesman of the EFCC, said that the search was not a raid, but part of an ongoing investigation which is “in line with (the EFCC’s) mandate and the rule of law.”

Orilade further said, “We need to state for the records that the EFCC did not raid Ambode’s house. It is instructive that his administration, like other former governors, is under investigation since they no longer constitutionally enjoy immunity against prosecution.”

As a tradition, the commission, Orilade stated, does not carry out an investigation on the pages of the newspapers or through the media; “Our operations are always covert until at a time when we file charges in court. Therefore, the attempt to cast the commission in a bad light is unacceptable as the EFCC will never engage in an illegal act. We remain committed to the war against corruption.”

It is even being speculated that Ambode may be one of the largest shareholders of Access Bank at the moment given the quantum of deals transacted over his four-year administration, a rumour that has not escaped the EFCC.

There is also the case of Craneburg Construction established in 2016, one year into Ambode’s administration, and purportedly owned by Wigwe. Without previous construction experience, the former governor reportedly awarded the company a $300million deal for road projects around select areas of the state particularly his Epe constituency.
Incidentally, Wigwe is not new to being a guest of the EFCC.

The EFCC stated that the source of some questionable funds – about $5 million that was routed through the bank – was traced to former Minister of Petroleum Resources, Diezani Alison-Madueke. Wigwe spent the night in the EFCC custody and was only released after making a down payment in the region of billions.

Whilst the investigation continues to dig deep, Ambode has decide to stay put in London, thus stirring up questions about what he is scared of and why he has refused to come home since he officially left office on May 29th.
POLITICS