Fleeing robbers knocked down by danfo driver in Lagos 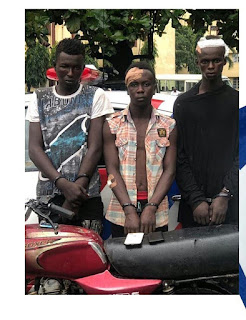 .
Three robbers operating in Ogun Long Bridge, Isheri, Ojodu - Berger and Agidingbi, Ikeja, were yesterday arrested by the operatives of the Lagos State Rapid Response Squad (RRS) and two android phones which they had robbed were retrieved from them.

The suspects, Issa Jidda (15), Alli Jumah (19) and Adamu Mohammed (22) were arrested around 8:46 p.m. around Olowopopo Way, Ikeja, after robbing two ladies in Agidingbi, Ikeja and Isheri.

The trio were arrested by RRS patrol team after it responded to a distress call that some robbers on bike were operating in Agidingbi. .

The officers trailed the robbers to Olowopopo Way, where a motorist who got a hint that the suspects were being chased, hit their okada to prevent them from escaping into the Lagos – Ibadan Expressway.
NIGERIA