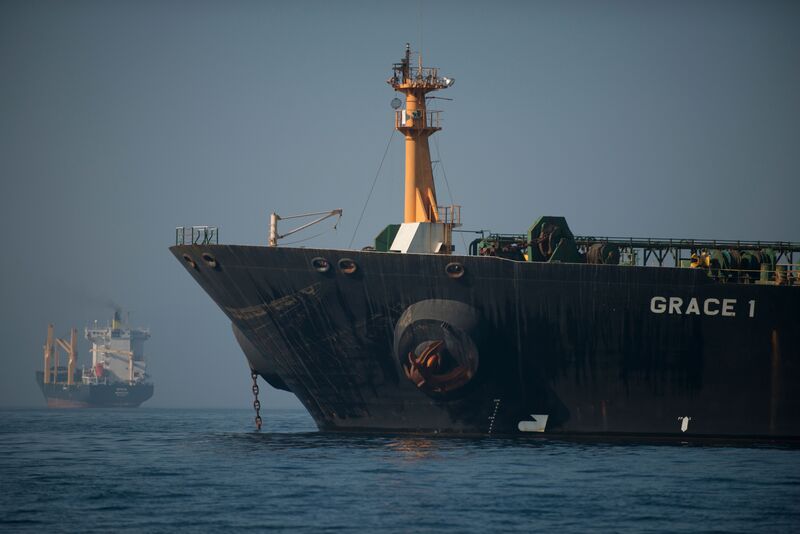 Earlier, UK media reported that the British territory's administrators would not be renewing the order to detain the Panamanian-flagged tanker, which was boarded by Royal Marines and placed under detention in early July amid claims that it was smuggling Iranian crude oil to a refinery in Syria, in contravention of EU sanctions.
The Iranian Ambassador to the UK Hamid Baeidinejad has confirmed that the Grace 1 Iranian-oil-laden tanker has been released from custody by Gibraltar authorities, tweeting that the ship was released and will soon leave the Gibraltar region.
"Moments ago, based on the decision of Gibraltar authorities and with court approval, Iran's oil tanker was released from its illegal detention," Baeidinejad wrote.
"In a frantic last-minute effort, the United States sought to prevent the tanker from being released, but suffered a miserable defeat," the ambassador added.
"All preparations have been made for the tanker to sail into open waters, and the vessel will soon leave Gibraltar," Baeidinejad reported.
Iranian Foreign Minister Mohammad Javad commented on the US's attempt to take over the Grace 1's detention, calling it an attempt at piracy "indicative of the Trump administration's contempt for the law."
Earlier Thursday, amid reports of the commercial vessel's imminent release, the US launched an appeal to take control over the vessel "on a number of allegations," which the Gibraltar government promised to consider.
However, Gibraltar Supreme Court Chief Justice Anthony Dudley denied claims of a US application to take over the detention of the vessel. "That's not before me," he was quoted as saying by the Gibraltar Chronicle. "There are no applications in relation to the US letters of request [for mutual legal assistance]," Dudley added.
Following the tanker's release, Gibraltar authorities published an explanation of the decision, saying the original July 4 detention was made on the basis of 'solid evidence' that the vessel was headed for Syria, and adding that they had received 'formal written assurances' from the Iranian government that the tanker would not unload its oil in Syria or other EU-sanctioned countries upon leaving Gibraltar. Chief Minister Fabian Picardo confirmed that the detention order had been lifted on that basis.
UK 'Won't Stand Idly By'
Later in the day, a British Foreign Office spokesman urged Iran to "abide by the assurances they have provided" to Gibraltar authorities not to sail the Grace 1 to Syria.
"We will not stand by and allow Iran - or anyone - to bypass vital EU sanctions on a regime that has deployed chemical weapons against its own people," the spokesperson added, referring to debunked claims repeatedly made by authorities from the UK, the US and France about the Damascus government's alleged 'chemical weapons use' in militant-held territories.
Earlier Thursday, Iranian media reported, citing informed sources, that the vessel would be released from Gibraltar's custody within a 48 hour period.
What Happened
The Grace 1's detention on July 4 led to a major cooling in relations between the UK and Iran, with Tehran accusing London of engaging in "piracy." On July 19, the Islamic Revolutionary Guard Corps seized the Stena Impero, a British-flagged tanker, in the Strait of Hormuz, alleging that it had engaged in dangerous behaviour and suggesting it ignored the warnings of Iran's maritime traffic control authorities. The decision prompted the UK to announce that it would be forming a 'European-led coalition' to ensure security in the Persian Gulf region, with London later dropping those plans and saying it would be signing up to a US-led maritime coalition instead.
Both London and Tehran have maintained that the ship seizures were separate and unrelated incidents. However, last week, Iranian President Hassan Rouhani warned that the United Kingdom would not be able to use the Strait of Hormuz if Iranian vessels were not able to pass through the Strait of Gibraltar. "Security for security, peace for peace, strait for strait," he said, during a meeting with Foreign Ministry officials.