Joe Biden, the frontrunner for the Democratic nomination for president, found his record on race under scrutiny again on Friday after a gaffe on the campaign trail.
“We should challenge students in these schools,” the former vice-president said during a speech to the Asian & Latino Coalition group in Des Moines, Iowa. “We have this notion that somehow if you’re poor, you cannot do it. Poor kids are just as bright and just as talented as white kids.”
After a pause, Biden added: “Wealthy kids, black kids, Asian kids, no, I really mean it, but think how we think about it.”
The remarks prompted criticism from left and right.
Bill de Blasio, the mayor of New York and rival Democratic candidate for president, tweeted: “‘Poor’ kids are just as bright and talented as white kids? To quickly dismiss @JoeBiden’s words as a mere ‘slip of the tongue’ is as concerning as what he said. We need to have a real conversation about the racism and sexism behind ‘electability’.” 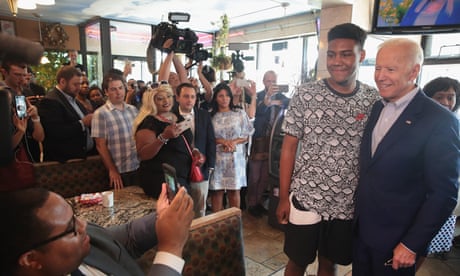 'This is a marathon': can Joe Biden go the distance for Democrats?

Read more
Donald Trump’s re-election campaign also swooped, insisting this was not a “gaffe” but rather part of a “pattern” of racially tone-deaf remarks. The president himself told reporters: “Joe Biden is not playing with a full deck. This is not somebody you can have as your president. But if he got the nomination, I’d be thrilled.”
The Biden campaign tried to clear up the mess. Kate Bedingfield, his deputy campaign manager, said he clearly “misspoke and immediately corrected himself”. Trump, she added, was “desperate to change the subject from his atrocious record of using racism to divide this country”.
Biden, 76, already has a long history of verbal blunders. Earlier on Thursday, he referred to Theresa May as “Margaret Thatcher”, the second time he has recently confused the two former British prime ministers. At last week’s Democratic primary debates, he urged viewers to visit a website that does not exist.
Gaffes of that nature can be laughed off, but on race he is in more treacherous waters. In 2007 he described the presidential candidate Barack Obama as “the first mainstream African American who is articulate and bright and clean and a nice-looking guy”.
His past policies on school bussing and criminal justice are also under attack, but Biden remains popular with older African American voters.
INTERNATIONAL NEWS