Katie Holmes Spotted In NYC After Being ‘Dumped’ By Jamie Foxx? 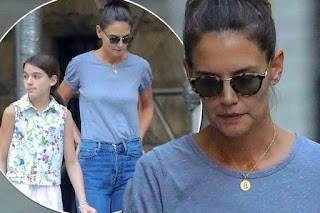 Katie Holmes didn’t show signs of stress and tension when she stepped out in New York City last weekend amid reports that she has allegedly been dumped by Jamie Foxx.

In the photographs obtained by Daily Mail, the “Dawson’s Creek” alum looks stunning in her simple get-up comprising a white striped long-sleeved top and skinny blue jeans cropped above her ankle. She also chose to walk comfortably in a pair of white tennis shoes.

Holmes, 40, wore a pair of large black designer sunglasses for the outing, and she also carried a small brown leather bag when she picked up a bouquet of colorful roses and purchased some items from CVS Pharmacy.

In some snaps, the brunette beauty is seen flashing a subtle smile while crossing the street. She also chose to ignore the paparazzi by looking away from the cameras as much as possible while traversing the sidewalk.


It wasn’t clear why Katie chose to be alone during her outing. Her 13-year-old daughter, Suri, whom she shares with ex-husband Tom Cruise, was not with her that day. The mother-daughter duo usually go out together.

Holmes’ solo outing comes amid reports claiming she has been dumped by Foxx, 51, because the Academy Award winner couldn’t be loyal to her. The rumors started when National Enquirer published a story claiming that Jamie could no longer control himself around other “hot chicks” that he’s allegedly decided to get rid of Katie.

The narrative appears to be fictitious since Holmes and Foxx are still together after making their relationship public by attending the Met Gala together back in May. The two Hollywood stars have been dating since 2013, but it was the first time that they attended a public gathering together.

A credible source also told People that even though Katie and Jamie are rarely seen together, they are still very committed to each other. The insider added that whenever they have the chance to spend time together, they grab the opportunity to do so. Otherwise, they just focus on their separate activities and working engagements.

“Katie and Jamie see each other as frequently as they can. They have known each other for years, and both turned out to be great parents, so they also have that in common. They are dedicated to their careers. Plus they give each other space,” another source said.