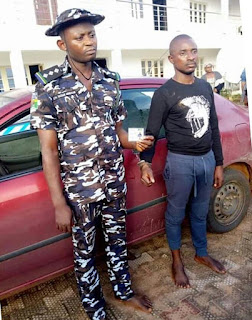 Armed robber who poses as a policeman, arrested .

Police operatives attached to the Command Special Anti Robbery Squad(SARS) have arrested at Ihiala, one Hassan Abuka, 33, fully dressed in Police camouflage uniform bearing a DSP rank and one Ismaila Ahmed, 37.
Suspects who specialize in impersonating Police to deceive their victims, snatched a Toyota Corolla car, from a yet to be identified victim in Lagos and were geolocated at their hideout in Anambra State.
Exhibits recovered in their possession include the snatched vehicle and additional vehicle plate number Lagos FKJ 701 FR.
NIGERIA