REAL MADRID have made a blockbuster offer of £110million (€120m) plus Luka Modric for Paris Saint-Germain’s Neymar - but Barcelona have pleaded with their former star to reject a move to the Bernabeu.

Neymar has been trying to force his way out of PSG after failing to settle during his two years in the French capital.

The Brazilian left Barcelona for £200million in August 2017 and he has longed to return to La Liga.


The Catalan giants are keen to re-sign the attacker but Real Madrid are in a prime position to hijack the transfer.

Real Madrid set to beat Barcelona to Neymar deal after PSG talks
And Spanish publication Sport have shed some light on the offer Los Bloncos have made.

Modric, who won the Ballon d’or last year, has reportedly been offered to PSG, along with a substantial sum of £110m.

Sport also claim Real president Florentino Perez has offered Neymar a five year contract
But Barcelona are hoping their former player will hold out until they can free up some budget to launch their own bid.

“I am always disappointed when a player turns up late but it is clear between us, now it is between the club and Neymar,” said Tuchel. 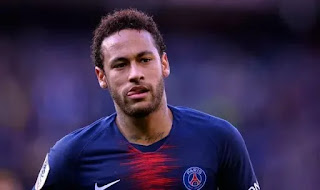