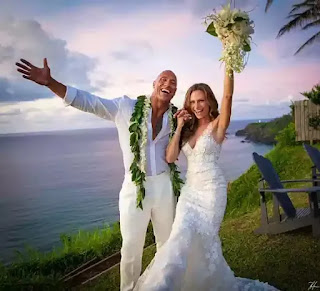 The Rock and Lauren Hashian secretly got married in Hawaii. Dwayne Johnson has spent the past few years becoming one of the biggest acting names in the world, and also solidifying his reputation as one of the nicest people in Hollywood.

Whether he’s working on the upcoming Jumanji: The Next Level or trading banter and comedic jabs with frequent co-star and friend Kevin Hart, Johnson always seems to be the happiest person on a film set, as both his and his various co-star’s social media accounts have often proven. The amount of films that the 47-year-old star is attached to - either as producer, actor or both, is somewhat staggering. What’s more, Johnson’s unrelenting work ethic is a key indication of why he’s currently the second-highest paid actor in the world for the third year in a row. Though his career began as a professional wrestler under the alter ego of The Rock, today he’s more often known by his given name, and the no-holds barred fury of his wrestling persona has mellowed into a star who always seems perfectly relaxed and soft-spoken with regards to the work he’s doing.


Although he may be completely adjusted to life as one of the world’s biggest film stars and all the challenges that entails, Johnson has now taken a new step in his life toward a more private adventure. Thanks to Johnson's Instagram account, the world is now aware that he got married over the weekend in a secret ceremony in Hawaii to his long-term significant other, Lauren Hashian. Johnson posted two photos of the ceremony, along with the message: “We do. August 18th, 2019. Hawaii. Pōmaikaʻi (blessed)”. Check out the post and photos below.

Johnson and Hashian have been together since 2007, and have two children together, Jasmine and Tiana. Hashian’s background is not specifically in film, though her father was the drummer of classic rock band Boston. The couple first met when Johnson was in Boston filming The Game Plan in 2006. This isn’t Johnson’s first marriage, having divorced his first wife, producer Dany Garcia, to whom he was married for just one year, but remains on good terms with. Nonetheless, Johnson and Hashian have surprised the world by exchanging vows in what looks to be a beautiful private ceremony by the sea. Johnson isn't currently filming anything, but his next release is coming in December with the aforementioned Jumanji  sequel. That being the case, it seems there was just enough time to get married to his long-term love.


Given the amount of happiness Johnson has brought fans and audiences around the world, it’s particularly nice to see him and his new wife so happy. There’s no word as to where the couple intend on honeymooning, but unsurprisingly, Johnson has a host of new projects in the works, which likely means it won’t be long before he’s back to work once again, thrilling audiences with his special set of onscreen talents.