US dow sees worst day of 2019,tumbles 800 points amid fears of recession. 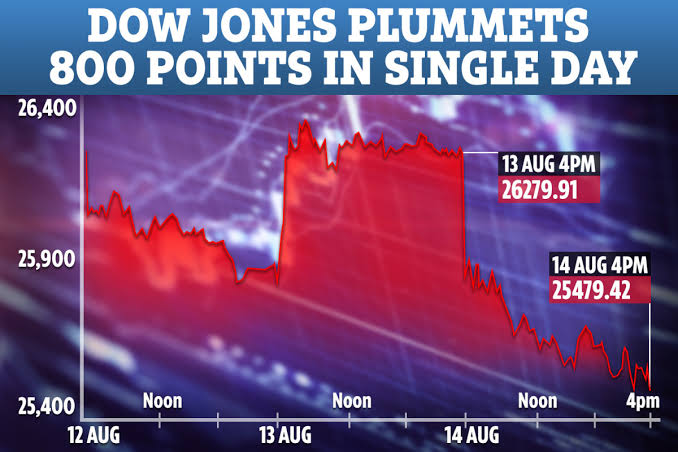 U.S. stock markets had their worst drop of the year Wednesday, with the Dow Jones Industrial Average dropping 800 points, or 3 percent.

The drop comes as some forecasters warn of increasing odds of a recession, while President Trump has continued to hammer the Federal Reserve over its handling of interest rates.

In terms of point losses, Wednesday's drop was the Dow's 4th worst day in its history, though it did not crack the top 20 list in terms of percentage drops.
The latest plunge came after the yield for 10-year Treasury bonds fell below that for 2-year bonds, an economic indicator that frequently predicts recession.

Economic forecasters have in recent days raised the odds of a recession in the coming year, fueled in part by concerns over the U.S. trade war with China.

Fears about a weakening economy more than erased gains on Tuesday, when Trump announced that he would delay and exempt some items from 10 percent tariffs on Chinese imports set to go into effect on Sept. 1.
Trump blamed the Federal Reserve for the state of the economy, saying it raised rates too quickly and had not cut them quickly enough, even as foreign central banks have lowered their rates more aggressively.

But foreign central banks have also been reacting to worse economic conditions abroad, with major European economies including Germany's already in potential recessions.

"China is not our problem," Trump tweeted Wednesday afternoon before the market closed.

"Our problem is with the Fed," he continued, before calling Federal Reserve Chairman Jerome Powell "clueless" and lamenting the "CRAZY INVERTED YIELD CURVE."

But not everyone was convinced that a recession is necessarily around the corner.

Former Fed Chair Janet Yellen said during an appearance on the Fox Business Network that while the odds of a recession had increased, the economy would "most likely" avoid that fate.

"I think that the U.S. economy has enough strength to avoid that," she said.

Banks such as Goldman Sacks have projected U.S. growth below 2 percent for the rest of the year, but that's far from the two quarters of negative growth that define a recession.
BUSINESS