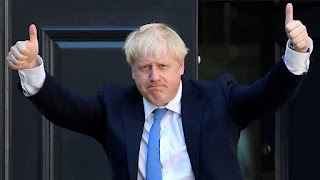 A rebel alliance of British lawmakers has voted to seize control of the parliamentary agenda, inflicting a humiliating defeat on Prime Minister Boris Johnson and threatening to derail his Brexit plans.
The government lost by 328 votes to 301, prompting Johnson to immediately announce that he would seek an election rather than be forced to request another "pointless delay" to the Brexit process.
The cross-party group of rebels will try to push through a bill on Wednesday that will prevent the UK leaving the EU on October 31 without a deal. The Prime Minister, meanwhile, will challenge the opposition Labour Party to vote in favor of a general election.
"Let there be no doubt about the consequences of this vote tonight. It means that parliament is on the brink of wrecking any deal we might be able to strike in Brussels," Johnson told the House of Commons moments after the vote was announced.
In an extraordinary purge, the 21 Conservative lawmakers who voted in favor of the measure were booted out of the parliamentary party. Kenneth Clarke, who has been a Conservative lawmaker for 49 years, told the BBC he was sanguine about the decision. "I knew what I was doing," he told the Newsnight program. Clarke said his party had been taken over by extremists: "Anyone who says I'm not a Conservative is taking an odd political view. It's the Brexit Party rebadged."
Other prominent lawmakers to be fired included former finance minister Philip Hammond, and the grandson of Winston Churchill, Nicholas Soames. The move detonated the Conservative Party's parliamentary majority, which dropped to zero earlier in the day when an MP defected to a rival party in dramatic fashion.

Related Article: UK minister refuses to rule out ignoring law preventing no-deal Brexit
In an orchestrated move, Phillip Lee defected to the Liberal Democrats just as Johnson began his address the House on Tuesday afternoon.
Members of Parliament opposed to Britain crashing out of the EU -- as Johnson has threatened to do -- triggered the drama on Tuesday, lawmakers' first day back after the summer break.
Johnson has been adamant he does not want to take the possibility of no-deal Brexit off the table. He believes the threat of no-deal makes his negotiation position stronger. Leaving without an agreement would be hugely disruptive for the British economy, but it would also hurt the rest of the EU, he argued.
Addressing the House of Commons, shouting to be heard over jeers of "sham" and "resign," Johnson condemned the legislation aimed at blocking a no-deal Brexit, saying it would "force me to go to Brussels and beg [for] an extension" and "destroy any chance" of negotiating a new agreement.
"It would enable our friends in Brussels to dictate the terms of the negotiation. That's what it does," Johnson said.
The bill, backed by a cross-party group of politicians, would send Johnson to Brussels in order to seek an extension to the Brexit process until January 2020 if he failed to agree a new deal with the EU at a summit scheduled for mid-October.

Related Article: Brexit turmoil sends the pound on a wild ride
The Prime Minister claims he been trying to renegotiate the withdrawal deal agreed with the EU by his predecessor Theresa May, demanding the removal of the so-called Irish backstop.
The clause is designed to prevent the reintroduction of border infrastructure between the Republic of Ireland, which will continue being an EU member, and Northern Ireland, which is part of the UK. The EU has so far refused, saying Johnson has not been able to offer a workable alternative.
In his speech on Tuesday, Johnson said that his government had made progress to this end -- progress the bill would obliterate.
But opposition Labour leader Jeremy Corbyn questioned Johnson's characterization of those negotiations with the EU, saying the government's only strategy so far has been to "run down the clock."
"The Prime Minister may claim progress has been made, but EU leaders report that the government has so far failed to present any new proposals," Corbyn said.
"It's becoming increasingly clear that his reckless government only has one plan, to crash out of the EU without a deal."
POLITICS